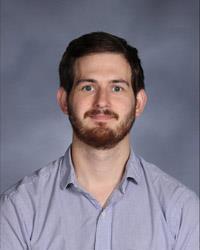 Greetings! My name is James Johnson and I’m originally from North Carolina. After graduating from Davidson College with a degree in Religion, I spent three years living and working with homeless families as part of a Catholic Worker community in Minnesota. In 2014, my wife and I moved to the Chicago area to be closer to her family and pursue graduate studies in Theology at Loyola University.

Becoming a high-school Religion teacher has allowed me to integrate many of my greatest interests – social justice, community building, interfaith dialogue, and integral education.

This is my fourth year in the Religion department at St. Joes! I teach:

In addition to teaching, I also moderate the Film Club after school on Mondays and the Book Club on Wednesdays.

You can add a copyright statement or legal disclaimer in this area if necessary.
Copyright © 2002-2020 Blackboard, Inc. All rights reserved.